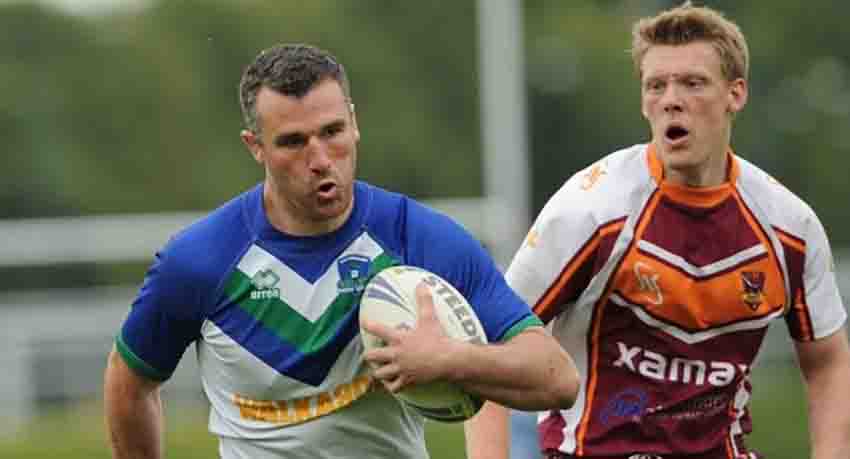 There were times on Saturday when it looked, albeit fleetingly, like Bristol Sonics’ winless run in Conference League South may be coming to an end. Sadly, it wasn’t to be, with the Sonics again succumbing to a heavy defeat – this time at the hands of 2013 Grand Finalists Nottingham Outlaws.

As with previous matches this season, the Sonics showed glimpses of greatness but were guilty of not controlling the ball, giving away too many penalties, and allowing tries from avoidable defensive lapses.

It was a familiar story for Bristol’s small travelling band of supporters, who had headed to the University of Nottingham Sports Ground more in hope than expectation.

For all the disappointment, Head Coach Jason Talbot could see positives in his side’s performance. He said: “For the first time in a while, I thought we really looked like a team. The lads who pulled on the jersey gave it everything. We made mistakes, of course, but the effort was outstanding. We’re a team in transition, with a number of inexperienced players who are still finding their feet at this level, and in Rugby League. Our progress is slow, but we’re getting there. I expect that first win of the season to come sooner rather than later.”

Nobody epitomized this desire and effort more than second-rower Joe Singleton, stepping into skipper Dom Swann’s shoes. The former second team captain and Sonics stalwart led from the front, putting in a tireless shift in attack and defense. His desire to get the Sonics out of their losing rut was plain to see.

Reflecting on the match, Singleton said: “It was an honour to captain the side today. We’re going through a tough run at present, and it’s demoralizing for all of us. On Saturday the lads really had a go, and when things clicked – as they seem to do in spells in matches – we were the better team. We need to make sure we can do this over 80 minutes, and that’s our big challenge over the coming weeks. Do that, and our first win of the year will come.”

The Sonics started well, but fell behind early on to a try wide on the left. They were soon back into the game, though, with an error by Nottingham 20 metres from their own line offering loose forward Will Tobin the chance to break from the base of the scrum and feed winger Freddie Blanks, who scuttled over in the left corner.

Bristol battled manfully for the remainder of the half, showing good glimpses and largely defending well, while opening themselves up to sucker punches. Having spotted a weakness in the Sonics’ right side defence, the Outlaws repeatedly attacked on that side, scoring three more tries – one converted – down that side before the interval. Still, all was not lost at 18-4 at half time.

The second half again started positively, with Bristol squandering a couple of good opportunities to score before Nottingham hit them with a long range try. Soon, the floodgates opened, and it wasn’t until the last 15 minutes when the Sonics regained some control and began to show their skills. By that time, the home side had added three more tries – two of which were scored by hooker Scott Morton – and were effectively home and hosed.

Still, Talbot would have been impressed by the way his side finished the game. An altercation between centre Mike Gaston and his opposite number from Nottingham seemed to fire up the Sonics, who hit back hard in the final quarter of the game.

There was a moment of glory for young winger Jack Farler, who sprinted all of 60 metres down the touchline to score after receiving a near perfect pass from Fraser Robinson. Nottingham scored a runaway try shortly afterwards, before Bristol ended the game on a high with arguably the try of the game.

From a “free play” following a Nottingham error, Lawrence Roycroft broke free on the halfway line and found Joe Singleton in support. He charged down the middle of the pitch, only to be hauled down by a covering defender. As he fell, he slipped out a wonder offload to the supporting Fraser Robinson, who sprinted away to touch down under the posts. Fullback Mike Harrisson capped an impressive first team debut by adding the extras.

It was hardly a great day for the Sonics, but the way they finished it gives everyone a little more hope for the games to come. Bristol now return home, and host Oxford Cavaliers at Dings Crusaders’ Landseer Avenue ground on Saturday (5th July). The match is part of “Sonics Super Saturday”, a free festival of Rugby League featuring all four of the club’s teams. Entrance is free, with the first match kicking off at 11.30am.

Bristol Sonics will be in a celebratory mood this Saturday, as they host their final scheduled Conference League South game of the season at Clifton RFC.

The Sonics will return to Station Road in September for a home play-off fixture, almost certainly against Saturday’s opponents, Nottingham Outlaws.

The Sonics secured second place in the League, and a home play-off tie, thanks to a dramatic, late 30-28 win at Leicester Storm next weekend.

For their final home league fixture of the season, the Sonics are laying on a post-match barbecue and are encouraging local sports fans to turn up in their droves and celebrate a successful season for the city’s Rugby League club.

The BBQ doubles as the end-of-season party and presentation for the club’s junior section. Under 14 and under 16 players, and their families, are being encouraged to turn up early and take it what promises to be a bruising, tense first team fixture against Nottingham.

Entry to watch the game is free for all, while Clifton RFC’s bar will be open all afternoon for those who fancy a tipple.

The Sonics will once again be without a number of first team regulars for the game against Nottingham, but Head Coach Karl Fearnley is hopeful of welcoming back a number of players, as his squad gears up for the end-of-season play-offs and a tilt at Grand Final glory.

Fearnley, who missed last Saturday’s game in Leicester due to work commitments, said: “Now we’ve secured second spot in the League, we want to get some form going into the play-offs. I hear that the second team players who stepped up against Leicester played terrifically well, so they’ll get another chance to impress this weekend. We’ve always said that first team places will be awarded on merit, and they’ve earned another chance to impress.

“Although the result isn’t important on Saturday, we’ll be looking to put in another good performance against a top Nottingham side, in order to get some confidence and match fitness ahead of the play-offs. Games against the Outlaws are usually entertaining, and with the barbecue afterwards, it should be a terrific afternoon.”

Before the game, Sonics first team players are planning to take a trip up to the Bristol Balloon Fiesta at Ashton Court Estate, to help with the promotion of the forthcoming Rugby League World Cup match in Bristol, which takes place at the Memorial Stadium in October. The Rugby League World Cup trophy will be on display at the Balloon Fiesta from Thursday 8th August until Saturday 10 August, as part of the nation-wide RLWC 2013 Trophy Tour. 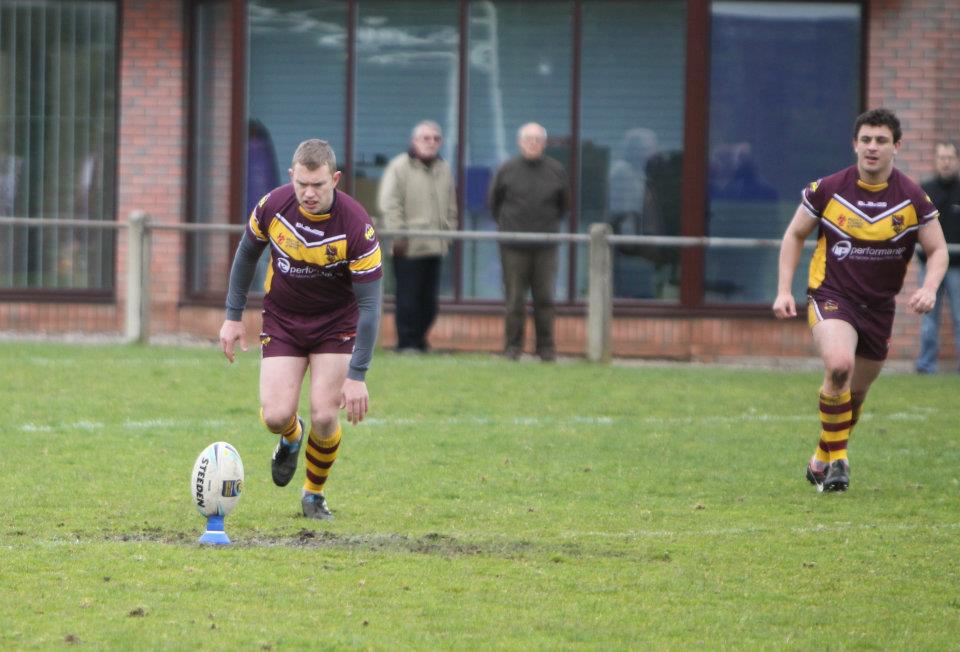 Bristol Sonics captain Dom Swann has warned his side that they must improve dramatically to have any chance of maintaining their unbeaten start to the season.

The Sonics face Nottingham Outlaws, holders of Conference League South’s only other 100 per cent record, at Clifton RFC on Saturday (kick-off 2.30pm). With the teams currently tied on points at the top of the table, the winners have a chance to go clear of their rivals, and a chasing pack led by pre-season title favourites Sheffield-Hallam Eagles.

Last weekend, the Sonics needed a last minute try from veteran fullback James Gross to keep their winning start to the season in tact. The previous week, they were fairly unimpressive against Conference League South new boys Northampton Demons but ground out a result in terrible conditions.

Skipper Swann knows that the Sonics must improve considerably if they are to maintain their winning start to the season, especially against an in-form Nottingham side that provided stiff competition to Bristol last season.

Swann said: “So far this season the results have been good, but the performances less so. We’ve somehow found enough to win, even when we’ve played badly, but we can’t keep playing poorly and expect to get the results, especially against good sides like Nottingham. This week I’ll be looking for a big improvement.”

In all three matches this season, the Sonics have made life difficult for themselves. Although they’ve often started and ended games well, they’ve yet to put in an ’80 minute performance’.

Stand-off Swann, who is now into his 11th season with the Sonics, is all to aware of the problems that need rectifying. He said: “It’s true that we’ve been making a lot of silly errors and letting our discipline lapse. This has allowed teams to get back into matches we should have been winning comfortably. I think there’s still some rustiness there. We know we’re not in great form, but the response in training has been excellent, and I’m expecting an improved performance on Saturday.”

Swann also praised the support his side has received so far this season. He said: “Despite the foul weather, there was a decent crowd at our first home game against Northampton. It really lifts the team when we have a big crowd cheering us on, so I’d encourage people to get up to Clifton on Saturday and show their support for one of Bristol’s most successful sports teams of recent years.”