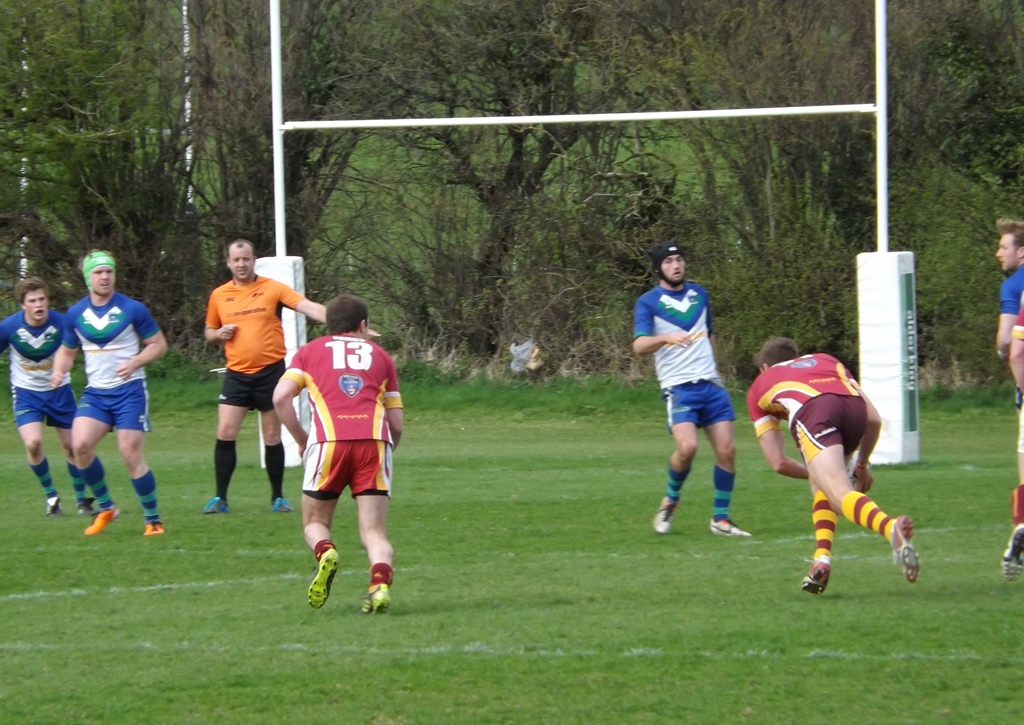 James Pritchard’s try 10 minutes from time helped Bristol Sonics to salvage a 22-all draw at Nottingham Outlaws and move back to the top of Conference League South.

Pricthard, playing his first Conference League South game of 2013, swooped to touch down the ball after Nottingham’s full-back fumbled a towering high kick from Phil Cowburn, under pressure from Sonics’ centre Mike Gaston. Skipper Dom Swann slotted over the conversion to level the scores.

There was still more drama to come, as the Outlaws were awarded a penalty, 35 metres from Bristol’s line, with seconds remaining. They elected to kick for goal, but the ball drifted wide in the swirling wind.

Earlier, Bristol had enjoyed the better of a tense opening period and deservedly took the lead after 15 minutes. James Gross collected an inside pass from Swann, who was playing at hooker for the first time in his 11-year Bristol career, rounded the Outlaws’ full back and sprinted 35 minutes to score. Swann converted.

Having played a good, control game, Bristol began to make errors and give away penalties under pressure from the home side. Nottingham eventually made the most of their increased possession, going over in the left corner on 35 minutes. Bristol’s defenders claimed the ball had been grounded inches short of the line, but the referee backed his own judgement and awarded the try. It was brilliantly converted from out wide, tying the scores at six apiece.

The Sonics soon went close to regaining their lead following a barnstorming 50-metre run from substitute forward Curtis Asante, but the young prop lost the ball 10 metres from the Outlaws’ line.

On the stroke of half time, the Sonics finally nudged themselves ahead. After dominant running from Jake Robertson, the ball was moved wide to James Gahan, who slipped a perfect pass to winger Mike Norman. He hared down the left wing and brilliantly stretched out to touch down the ball with millimetres to spare. Swann couldn’t convert, but Bristol were happy to be ahead 10-6 at the break.

Nottimgham began the second half in scintillating form, and the Sonics struggled to respond. Following three consecutive sets of six deep in Bristol territory, the Outlaws crossed for a try out wide. The conversion was missed, putting the teams all square once more.

Bristol were guilty of giving away needless penalties and struggled to keep hold of the ball. Nottingham made the most of the extra possession, adding two scores in 10 minutes to go 12 clear at 22-10.

Bristol looked a shambles, and their disintegration and frustration was best summed up when they were penalised for offside straight from the resulting kick-off.

Things looked bleak, but somehow the Sonics found a way back into the game. Now enjoying a little more possession, Mike Gaston, Jake Robertson and James Gahan began to make more ground. On 67 minutes Gahan produced a superb sidestep and turn of speed to score a wonderful, 60-metre solo try, converted by Swann.

Then, with their next attacking set of six tackles, the Sonics produced the converted try that levelled the scores. Cowburn’s kick got caught in the wind, and the Outlaws’ full back could only spill it behind his own line. Thankfully for Bristol, James Pritchard was on hand to touch down and rescue a point.

Bristol Sonics’ Director of Rugby, Karl Fearnley, was pleased with the way his side came back. He said: “We were pretty poor for most of the second half and didn’t control the ball well enough. I always thought that we could get back into it, though, and the lads showed great charcter to come back to grab a point. A lot of credit must go to Nottingham, who had the best of us for long periods and perhaps deserved the win. I’m happy enough with the result in the end, but we’ll need to improve considerably in coming weeks.”

The point puts Bristol back at the top of the Conference League South table, one clear of Sheffield-Hallam Eagles, who aren’t playing this weekend. The Sonics next face St Albans Centurions in Bristol in two weeks time.

Meanwhile, an inexperienced and under-strength Bristol Sonics A side produced a battling performance to go down 32-6 to Old Patesians in the West of England League. The Sonics’ try was scored by Lee Bartlett and converted by 16 year-old debutant Harry Brooker, brother of first team stars Dan and Marcus, and fellow second-teamer Dean.