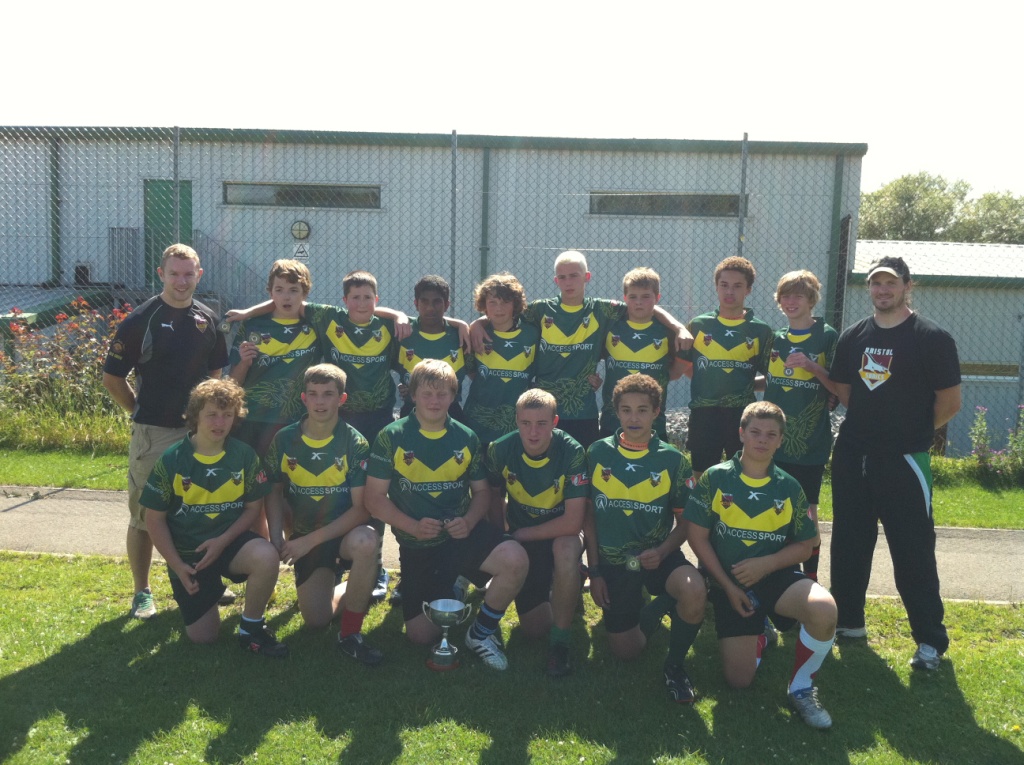 In the build-up to the arrival of the 2013 Rugby League World Cup in Bristol this autumn, Bristol Sonics have announced a full summer programme of junior Rugby League in the city.

The programme features a mix of training sessions and summer camps for under 14s (12-14 years-old) and under 16s (14-16), as well as coaching in four secondary schools around Bristol and South Gloucestershire.

The programme, which is being run in association with the University of Gloucestershire All Golds and Clifton RFC, will begin in May and run until September.

The action begins on Sunday 19th May at Clifton RFC in Henbury (10.30am), with a 90-minute taster session for boys aged between 12 and 16 (Under 14s and Under 16s). The sessions, which will be run by fully qualified and CRB-checked coaches, continue weekly until July and will lead to matches against other teams in the region.

Throughout June, Sonics coaches will also conduct weekly sessions in four secondary schools in Bristol and South Gloucestershire, including John Cabot Academy, which will include coaching for Year 8 and Year 9 girls. The schools programme will culminate with a junior Rugby League festival in the first week of July.

For the first time, the Sonics will also be running a series of extended weekday ‘summer camps’ for U14 and U16 boys during the school holidays. The sessions, which take place at Clifton RFC in Henbury, begin on July 17 and continue until September 4.

Any parents or players interested in playing junior Rugby League in Bristol and South Gloucestershire this summer can find more information and contact details for coaches at www.bristolsonics.com

Q: What ages can play junior rugby with the Sonics?

A: The Sonics are running Under 14 and Under 16 age groups. Boys can play “one year up” according to RFL rules so U14s covers anyone in school years 8 and 9, and U16’s covers school years 10 and 11. The longer–term aim is to start an U19’s team but at the moment the only option for anyone aged over 16 is to train with the senior squads.

Q: Do I need to register before coming to a training session?

A: No, a brief registration form will need to be filled in but that can be done when you attend your first training session.

Q: How much does it cost?

A: The cost is £25 for the season which covers a training t-shirt (will be given out as soon as payment received), training costs and match day costs and insurance.

Q: When will matches be held?

A: Matches will be held on Sunday mornings, typically with an 11:00 kick-off. The match schedule for both age groups is being finalised with teams from Gloucestershire, Somerset and South Wales .

Q: Where are training / matches held?

Q: How are the Club’s coaches qualified?

A: All of the Club’s coaches are qualified through accredited RFL (Rugby Football League) coaching courses to UKCC Level 2. All coaches are also is First aid qualified, have completed the RFL’s Safeguarding and Protecting Children course and are Criminal Records bureau (CRB) checked.

Q: What equipment do I need to play Rugby League?

A: For matches a playing shirt will be provided by the club but players should bring suitable rugby shorts and socks. For training children will be expected to wear their own suitable kit, although will be provided with a training shirt.

Rugby / football boots and gum shields should be brought to training and matches. Players can wear padded tops and scrum caps although this is down to personal choice.

Q: Do I need to have played Rugby League before?

A: No, full training will be provided.

Q: Who can I contact to find out more information?

A: Email juniors@bristolsonics.com and your enquiry will be directed to the correct person.