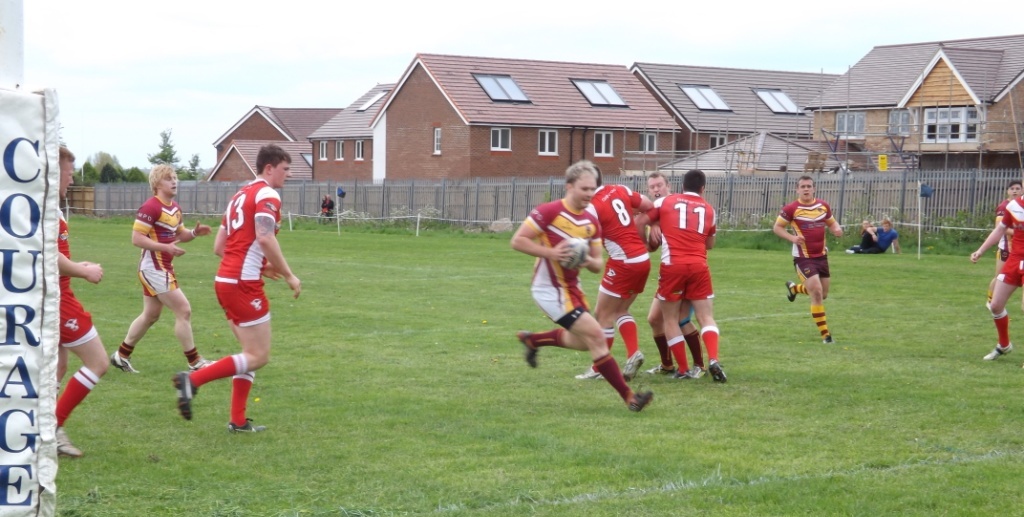 Bristol Sonics tasted defeat for the first time this season on Saturday, when they lost a nail-biting encounter with Conference League South title favourites Sheffield Hallam Eagles 36-30 at Landseer Avenue.

Bristol were left rueing the cost of injuries which left them battling to stay in the game in the second half. The Sonics lost a number of players to injury during the course of the game, and had to dig deep to stay with a Hallam side full of Academy players from Championship title-holders Sheffield Eagles.

It was a performance that earned praise from Sonics Director of Rugby Karl Fearnley, who was impressed by his players battling qualities. He said: “Sheffield are a top side, so to push them close with all the injuries we picked up shows how much desire there is in this squad. There were some battered and bruised bodies out there in the second half, but the lads never gave up. It fills me with a great deal of confidence for the next time we meet Sheffield in July.”

The Sonics, who beat the Eagles in Sheffield on the first day of the season – the only Conference League South club to do so to date – started brightly and opened up a 12-point lead in the early stages.

After the Eagles made a lightening-quick start and threatened to score on their first set of six, Bristol took command. After eight minutes, a dropped high kick deep in Sheffield territory gave the Sonics a chance to attack. A terrific one-handed offload from loose forward Rob Verber found skipper Dom Swann, who released Mike Gaston. The tall centre showed great footwork to cut back inside and cross the whitewash, to rapturous applause from the Sonics’ biggest crowd of the season. Dom Swann calmly added the extras.

On 13 minutes the Sonics extended their lead. This time Swann was the provider, running left and flicking a perfect reverse pass back inside to create the space for Johan Schoeman to saunter through to the tryline unopposed. Swann again converted.

Sheffield began to get more of the ball and were soon pushing the home side back through hard running from their talented forwards and quick, expansive wide play. They got their reward on 22 minutes, when prop forward Lee Sanders stretched out to put the ball down over the line, Tom Holt converting.

Three minutes later, Sheffield were level. When Sonics second-rower Josh Sampson fumbled a low ‘grubber’ kick from scrum half Shaun Roberts behind his own line, Tom Holt was on hand to touch down. He converted his own try to tie the scores at 12-all.

With half time approaching, Sonics winger James Raymond was helped from the field with concussion following a fair but brutal tackle from a Sheffield forward. With no backs on the interchange bench, Bristol were forced to hastily reorganize.

It didn’t make much difference to begin with, as the Sonics hit the front on 39 minutes when centre Marcus Brooker forced his way over from close range, Swann converting. But a minute later, Raymond’s absence was felt as Sheffield scored down his wing. It was his opposite number Donald Kudangirana who touched down, though Bristol were furious that referee Ian Curzon had missed centre Tom Ashton taking out two covering defenders in the build-up. Holt converted to level the scores at 18-all at half time.

Early in the second period, Sheffield took control. Five minutes into the second half, they took the lead for the first time when Kudangirana finished off a quick right-to-left hands move, Holt converting. Then, on 55 minutes, prop forward Sam Williamson broke free of some weak attempted tackles on half way and sprinted to the try line. Instead of scoring himself, he waited for Kudangirana to catch up, slipped him the pass and watched as the winger celebrated his hat-trick.

It looked as if Bristol would crumble. Now without stand-off Swann, who was forced off with a hamstring injury, and with replacement Marcus Brown also limping, it seemed that the Sonics would run out of fit bodies against a team in scintillating form. With Sheffield making easy yards with the ball, and successfully slowing down Bristol in defence, most thought it would be one-way traffic from then on in.

Bristol are made of sterner stuff these days, and showed great character to edge their way back into the game. On the back of a lot of possession, Bristol reduced the arrears to six points on 75 minutes when impressive prop forward Dan Brooker, playing out of position as a play-maker, powered his way to the line. He converted his own try to make it 24-30.

From the re-start Bristol attempted to attack down the left, but Josh Sampson lost the ball. 30 seconds later Hallam made the game safe when substitute forward Alex Palmer charged through some tired tackles on halfway and sprinted 50 metres to touch down.

There was still time for a final twist, as Bristol went down the other end and scored through the tireless Jake Robertson, Brooker again converting, but it came too late to change the outcome of the game. As Brooker’s conversion sailed through the posts, Curzon blew for full time.

The loss means that the Sonics drop to second in the table, behind Sheffield Hallam on points difference. The two sides both have 10 points, four points more than third-placed Nottingham Outlaws.