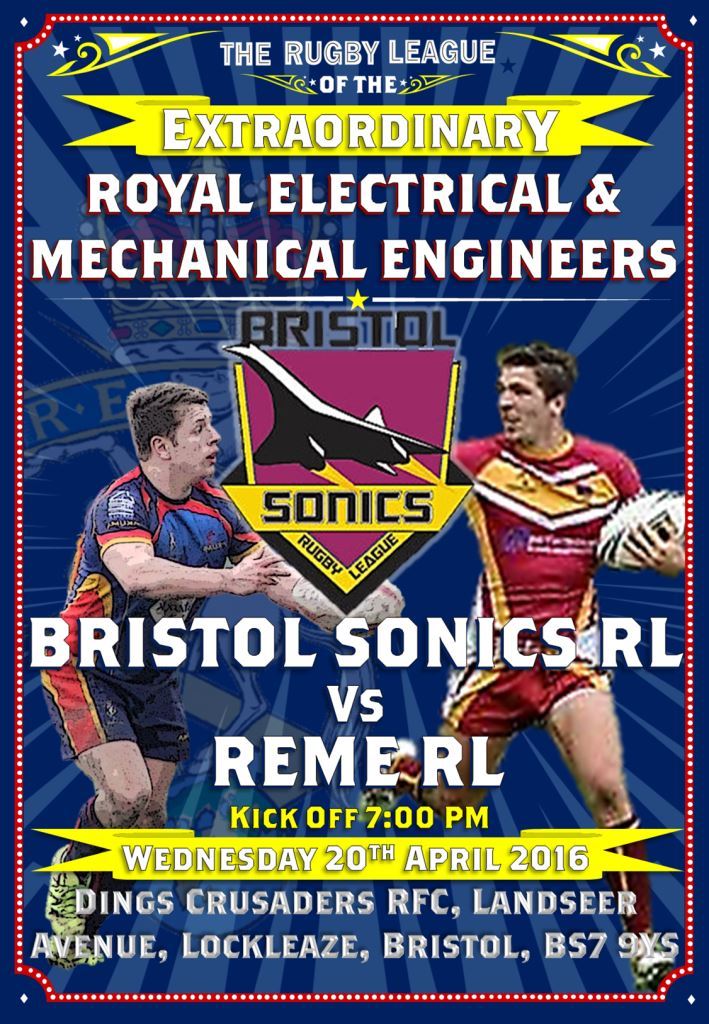 The Sonics will face the Royal Electrical & Mechanical Engineers (kick-off 7pm), in a match that should test the home side’s mettle ahead of the up-coming West of England League season.

Player/coach Dom Swann will use the match, which will be played in four, 20-minute quarters, to test out combinations of players and give game time to new recruits and returning favourites.
Since beginning pre-season training a few weeks back, the number of players taking part in sessions has been remarkably high. This upturn in fortunes can partly be attributed to a high number of new recruits, many of which are trying Rugby League for the first time.
Dom Swann said: “There’s been a real buzz at training over the last few weeks, with both regulars and new recruits putting in a lot of effort. The intensity and quality on show has been obvious, and it definitely makes us all feel optimistic ahead of the new season.
“Wednesday night’s game gives everyone an opportunity to get some game time before we get into the serious business of the West of England League, which starts in a few weeks time. Playing military opposition is always tough, and we’re all expecting a very difficult match. The kind of intensity and physicality they bring will help our players, especially those new to the game, by showcasing the kind of levels we need to attain in order to compete this season.”
Swann is happy with how the Sonics squad is shaping up, but is at pains to point out that new players are always welcome. He said: “We’re always welcome to new recruits, regardless of previous experience or lack of it. The vast majority of our players had played no Rugby League prior to getting involved with the Sonics, and we can provide training in the basics as well as the more advanced stuff the team works on. If you’re interested in giving League a go, simply turn up at training. You’ll find details of sessions on our website and social media pages.”
The Sonics next assignment, following Wednesday’s game at Dings, is the South West Nines on Sunday 1st May. The following weekend they will compete in the West of England Nines in Swindon on Saturday May 7 before beginning their West of England League campaign on May 14. Last year, the Sonics reached the West of England League Grand Final, losing to Bath & Wiltshire Romans in a thriller. This season, the Sonics are naturally aiming to go one better.
Dom Swann said: “Our aim is always to win any competition we’re involved in, but we have a point to prove after losing the Grand Final last season. The way the League is structured this season will make it particularly difficult for us to take the title, as we’ll have to beat a lot of good teams week in, week out to stand a chance. We think we’re developing a squad that will be up to the task, but until we start playing matches we won’t know how we’re looking. That’s why Wednesday’s game is so important. After that, we’ll know exactly what we need to work on in order to make the improvements needed to challenge Bath, Portsmouth, Gloucestershire and everyone else in the division.”
Bristol Sonics take on the Royal Electrical & Mechanical Enginners at Dings Crusaders’ Landseer Avenue ground on Wednesday, 20th April, kick-off 7pm. Entrance is free.