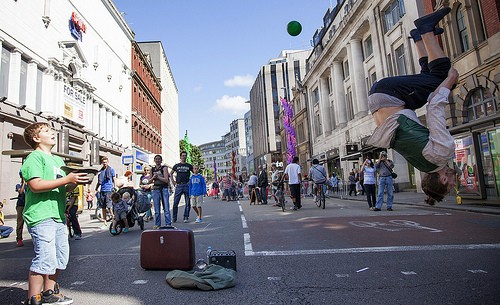 Bristol Sonics will be taking to the open, traffic-free streets of Bristol city centre this Sunday (29th September) to offer people of all ages the chance to try touch Rugby League ahead of the arrival of the Rugby League World Cup in the city next month.

As part of Bristol City Council’s ongoing “Make Sundays Special” initiative, which offers activities for all the family on the closed-off streets around the Old City area, the Sonics will be holding a free, hour-long introduction to touch Rugby League from 12noon to 1pm in the fenced-off “games area” on Baldwin Street.

Players, coaches and volunteers from the city’s  community Rugby League club will be on hand to school young and old alike in the basics of Rugby League. Children and adults will be given a chance to try their hand at touch Rugby League in a safe environment, right in the heart of Bristol city centre.

Sonics players and volunteers will also be helping to spread the word about the 2013 Rugby League World Cup, which begins on Saturday October 26 with a dramatic opening ceremony and double-header of matches featuring England, Australia, Wales and Italy at The Millennium Stadium, Cardiff. A few days later, the action moves to Bristol, as the Cook Islands take on the USA at The Memorial Stadium on Wednesday October 30. There will be a Rugby League World Cup information stand on Baldwin Street, where people can find out more about the tournament, the game in Bristol and how to buy tickets.

Bristol Sonics’ captain Dom Swann, the club’s longest-serving player, said: “It’s really exciting to be able to spread the Rugby League message to the people of Bristol as part of Make Sundays Special. It’s a terrific initiative from the Council and a great opportunity to get more people interested in the sport and the Rugby League World Cup, which we’re all thrilled is coming to Bristol. Rugby League is an exciting, fast-paced sport and touch Rugby League offers a great introduction. It can be played by anyone, regardless of age, fitness or ability, and we’re looking forward to getting new people interested in our sport on Sunday.”

Make Sundays Special is one of Bristol City Council’s flagship programmes. One Sunday a month, roads around the Old City (Baldwin Street, Corn St, St Nicholas Street, Small Street and the surrounding area) are closed to motor vehicles but open to the public. The area is then transformed into a bustling carnival of music, entertainment, free activities, sports taster sessions, markets and street vendors. This Sunday, as well as the Sonics’ touch Rugby League sessions, visitors will get a chance to play ping-pong, bike polo and basketball, relax to a wide range of music, test themselves on a pop-up climbing wall, and shop at a bustling street market.

For more information on Make Sundays special, check out www.bristol.gov.uk/sundays. To buy tickets for the 2013 Rugby League World Cup, head to www.rlwc2013.com/tickets. If you’d like to learn more about Rugby League in Bristol, point your browser at www.bristolsonics.com.

Bristol Sonics’ dreams of a first Conference League South Grand Final appearance were dashed on Saturday, as they fell to a disappointing 21-8 defeat to in-form Nottingham Outlaws at Clifton RFC.

The Sonics saved arguably their poorest performance of the season for their biggest game of the campaign. Nottingham, on the other hand, were inspired, and produced a performance worthy of the occasion. They were at Bristol right from the start, and had built up a 20-0 lead in just over 20 minutes. From then on, there was always going to be one winner.

Bristol did manage to produce a better second half performance and twice crossed the whitewash in the closing stages to restore some pride, but by then the match had long been decided. Given the season that the Sonics have had, it was a depressing anticlimax for fans, players and club officials alike.
Director of Rugby Karl Fearnley was particularly disappointed with his side’s display. He said: “I’m disappointed with the way the boys played today, and with our approach to the game. We just didn’t seem to be able to play to the level of intensity needed to win tough matches like this. We defended poorly in the first half. While we improved massively in the second half, you can’t expect to give a top team like Nottingham a 21 point start and expect to win. Credit must go to Nottingham for the way they performed, as they were excellent from the word go. That said, we never gave ourselves a chance, and that’s what hurts the most.”

Nottingham played some dazzling rugby in the first half and seemed to catch Bristol cold. They opened the scoring after just six minutes, scrum half Alex Whittle carving open Bristol’s defence with a simple dummy before jogging 30 metres to touch down. Two minutes later, they extended their lead further when a clever cross-field kick from Paul Calland found space behind the Sonics defence. Winger Sam Campbell scooped the ball up two metres from the line and dived over to touch down.

It got worse for Bristol. Further tries followed for the impressive Calland and a second for Campbell, and the visitors found themselves 20-0 up after just 22 minutes. Bristol briefly rallied late in the first half and saw a Marcus Brooker try chalked off for a forward pass, but the Outlaws were well worth their healthy lead. They rubbed salt into Sonics’ wounds on the half time hooter when Paul Calland slotted over a drop goal to edge the Outlaws further ahead.

Bristol lay siege to the Nottingham line for long periods in the second half, but struggled to breach the visitors’ well-organised defence. The home side did manage two scores in the final 10 minutes – centres Marcus Brooker and Mike Gaston crossing after excellent improvised attacking play – but by then Nottingham had already booked their place in the Grand Final on September 15.

It was a deflating end to what has largely been an excellent season for the Sonics, who finished second in the league having lost just three games all year.